Last night was opening night for Horror Nights 2015! I did not do go through the media entrance. This will give most of you a better idea about how the main gate works.

After you go by the big Universal Globe, you will have to go through these temporary metal detectors. 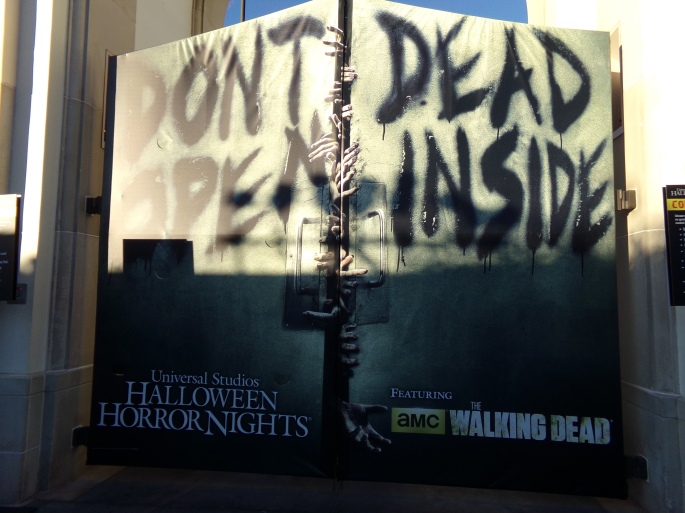 This is right in the middle where the red carpet is. You can either go left or right to get in.

I’d suggest going to the far right where early entry is. Anyone can do it, but only like a third of the people who were there actually did early entry…

The park just closed so people were walking out as Horror Nights guest walked in. the did gave us wrist bands so they could tell who was here for Horror Nights.

The lower lot closed 30 mins early for prep for us!

They had all the rides open and a preview of Jabbawockeezes. Then Insidious: Return to the Further and The Walking Dead: Wolves Not Far opened at 6:30 which gives us 30 mins before everyone else gets in.

I had like 10 mins, so I rode mummy real quick.

Now it was time for Insidious!

Insidious was about a 15 min wait, which isn’t bad. But anyway, time for my review!

Insidious: Return to the Further

Theming: 7/10 The theming was pretty good, but there was moments where you could see the outside light which would ruins the experience.

Story: 8/10 I’ve only seen Insidious: Chapter 2 and this maze is based after all 3 movies. As far as I can know, it follows the story well. There were a few scenes I remember seeing in the movie. Like you see Elise get killed and see the room where they sit in a circle and the guy roles the dice to make contact with Elise’s ghost.

Scary: 2/10 Disappointing in terms of making me feel fear and scaring me. I don’t scare easily. It requires alot, so I will be quite critical on a few mazes that lacks scare factor. Nothing in this made me jump at all. I kept a straight face the whole maze, which is not a goal of mine to do.

Next up was the Walking Dead: Wolves Not Far!

I’m glad I did this maze when I did. It was over an hour long for me, but did get up to 110 mins. By far the most crowded maze.

This line NEVER FREAKING ENDS! You get to the end down here and you’re,”like okay just got to turn around were there!” …Well sorry, you have to go all the way along the back side of the maze too 🙂

Here’s a “Walker!” Look at that detail!

Theming: 7/10 wasn’t super amazing, but had some solid theming!

Story: 8/10 I’m not up to date on The Walking Dead, but from what I can tell it seems to follow some sort of story.

Scary: 8/10 This maze got me to jump a few times. Not incredibly scary, but it has some good moments!

Next up was This is the End 3D. This mazes had the lowest capacity of any maze in the park.

This is the queue for This is the End 3D. It starts from transformers, goes all the way around the Mummy building to the Raptor Encounter.

Theming: 6/10 Not the best, but average for a 3D maze. Everything felt very repetitive.

Story: 9/10 Once again, as far as I know it follows the story. This one is kinda weird though since it’s based after a comedy movie. The whole maze you hear quotes from the movie. Half of the time you just hear *beep* because the use they use strong language.

Scary: 2/10 Same as Insidious, not scary, but once again thats usual for a 3D maze.

3D utilization: 5/10 I don’t thing they used the 3D as well as they could have, but it was still decent.

After that, I grabbed some dinner at the nearby Panda Express.

After dinner the lower lot was super crowded and the upper lot lost alot of the crowd, so I headed to Terror Tram which was maybe 20 mins.

Terror Tram was based on something other than The Walking Dead! This year it was Purge and it honestly felt more or less the same.

Theming: 9/10 great theming as it takes place in the back lot. You go through the Bates Motel and Ware of the World’s sets that does fit quite well.

Story: 10/1o Story was understandable for someone like me who didn’t really know what the Purge was! It’s a “Holiday” one night every year where crime is legal. The story is, Universal Studios has a party for the Purge to help keep people “safe.” It turns out that it was a scam to get rid of “scum” how don’t celebrate the Purge by going…well crazy and killing people. So The Tram drops you off and hundreds of actors start running towards you with knives, bats, ropes, and chainsaws. This happens all while playing Patriotic music like the Star Spangled Banner.

Scary: 1/10 Though that last I described sounds scary, that’s the best they got. After that it’s mediocre jumpscares and tons of “droughts” of scares. In all honesty, the concept is cool, but NEVER works in the long run. It needs to be completely different next year! No kicking you off of the tram. Just a haunted tram ride would work much better…kinda like a haunted hayride.

The Jabbawockees show was currently going on, so I thought it would be best to hit up Halloween while that’s going on. It was mostly the smartest thing to do, but boy, it was still crowded…AND I MEAN CROWDED!

I’ve been to many crowded places in my days such as Time square, Downtown LA, Boston, and etc, but I’ve never seen so many people in place. I’m not kidding. This is more crowded than Time Square during the Macy’s Thanksgiving Parade! I you can see is a sea of people as far as the eye could see! Pretty much the WHOLE Universal plaza (where Grinchmas is) was filled with people standing shoulder to shoulder!

Anyway after an hour and a half in line, I made it to Micheal’s house! I’m a huge fan of Halloween and it’s one of very few Horror movies I think are actually high class movies. This is an absolute classic! I felt like I was actually in one of my all time favorite movies!

Theming: 10/10 looks exactly like the movie! Every little detail is perfect! The special effects scared the crap out of me. For instance, there was mirror that showed Micheal and I thought it was just an effect on the glass. Well Micheal breaks through the glass a trys getting you. So unexpected and awesome!

Story: 10/10 Follows the original story of Halloween scene by scene perfectly. As soon as you enter his house, you see him in his clown costume standing at the top of the stairs after he kills his sister! You see his first murders as an adult like the ones where he’s in the bed sheet pretending to be the boyfriend! You see Micheal charge and get shot and pretty much shrugs it off as nothing after he stuns him for a second!

Scary: 9/10 Not as scary as Vault 666 at Six Flags Magic Mountain, but it’s a close second! The whole maze I felt scared which I’ve never felt in any maze I’ve ever been in, even Vault 666. Like I was terrified, but I definitely wasn’t strolling through it like I do other mazes. The whole time I had a feeling of helplessness! The Character himself leaves you feeling defenseless, because he’s pure evil and won’t stop at anything till your brutally dead. he himself isn’t cliche like all the other mazes. The others are hundreds of demons, zombies, ghosts, and etc just there, but there’s only one Micheal and he has you as a specific target unlike other creatures who are just there and have nothing against you.

Finally, I finished up with the backlot mazes! I heard good things from AVP last year. I’ve heard everything from it being the ultimate maze! It returned this year due to popular demand which Universal is not known for doing as they change everything every year!

I went into this mazes with high hopes, but when you see the entrance you hopes are destroyed… This is the entrance… No signs, just an open wall to where you can see plywood walls inside… The maze inside was really cool and different, but the way you start kills the experience!

Theming: 9/10 I’d give it a ten if the entrance/exit was better! the theming inside is fantastic!

Story: 3/10 Didn’t follow the movie at all. You just start in the Alien’s ship where their offspring scorpion looking things try to jump at from behind glass containers. then you suddenly are in the woods with the ship you just walked out of, out of site. The rest of the maze is the just simply the Aliens offspring attacking humans. There’s not too many encounters with Predators. Then you exit the maze at the back of the building and walk out next to the plywood walls… I definitely don’t think that was in the movie where the actors walk into another room and find that the whole thing was made of plywood 🙂

Scary: 4/10 Decent scares, but the scares where more artificial scares from props, not from actors.

Finally there was Crimson Peak which the movie it’s based on hasn’t actually been released yet, so I had no idea what to expect or what the heck was going on…

Story: 5/10 I could tell they were having some kinda story element going on, but the fact that movie isn’t out yet, I have no idea what was going on and nothing was explained to help our understanding!

Scares: 5/10 They were eh. I didn’t know what was going on, so I don’t know what I was supposed to be afraid of…

With 15 mins left till the park closed, I decided to take a relaxing boat ride! It’s so cool at night! Do have a POV for you guys that I’ll post later.

That concludes your tour of Halloween Horror Nights (USH) 2015!

Final Thoughts: Definitely worth going, even if you have to wait awhile for a few mazes! Get your tickets now at  http://www.halloweenhorrornights.com/hollywood/2015/tickets.php?__source=bps_hhn15_tickets Hurry, the sooner you go, the more you’ll save on admission!