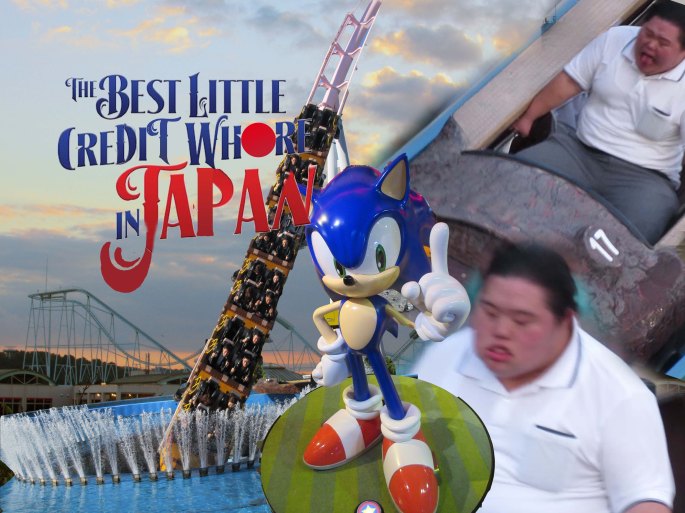 I really didn’t want to title this Tokyo Joypolis, Yokohama Cosmo World, and Sea Paradise Trip Report 9/27/18. That’s just too long and boring of a title for a trip report to three parks in one day…but that’s basically what this blog post is. 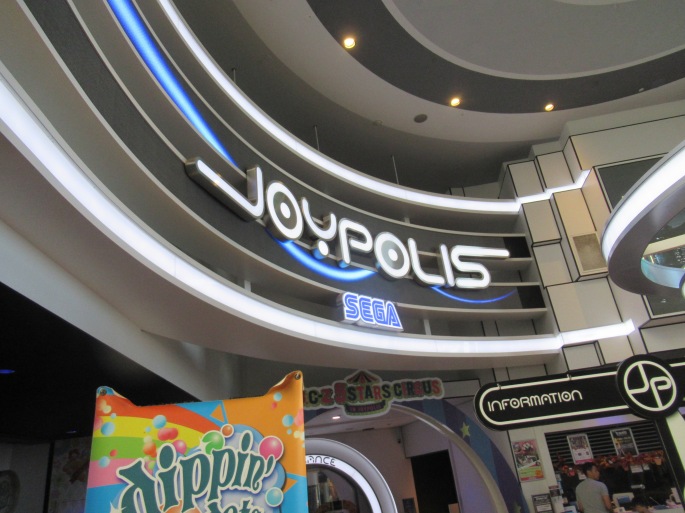 First park of the day was Tokyo Joypolis, Sega themed theme park that all indoors! 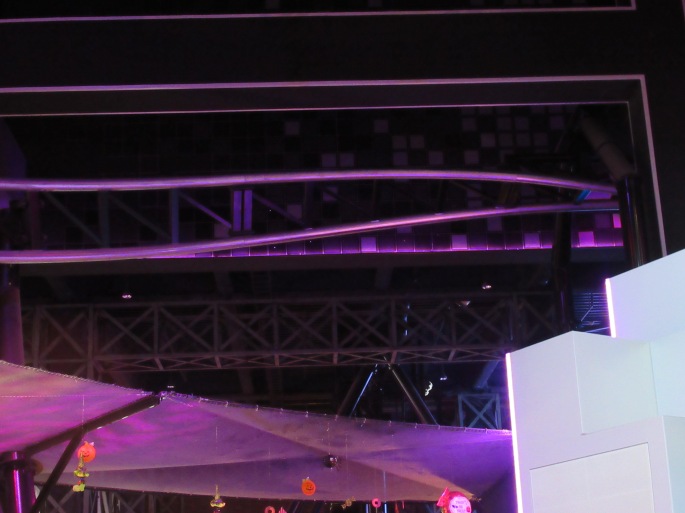 First things first…the coaster credit! Get it outta the way! Gekion Live Coaster is a interactive dark spinning coaster that features a launch and a zero g roll. The dark ride section takes up most of the ride. The interactive part is playing a Guitar Hero style game. You have four buttons on your harness and you need to hit the buttons with the same timing as one on screen. After the dark ride sections, you get launched into a zero g roll while spinning. It has a short section afterwards that’s more like a traditional Gerstlauer spinner. Overall, it’s pretty good and the coaster portion is better than anything on Time Traveler. Sorry had to throw that shade there, because Time Traveler should not have been a spinner. 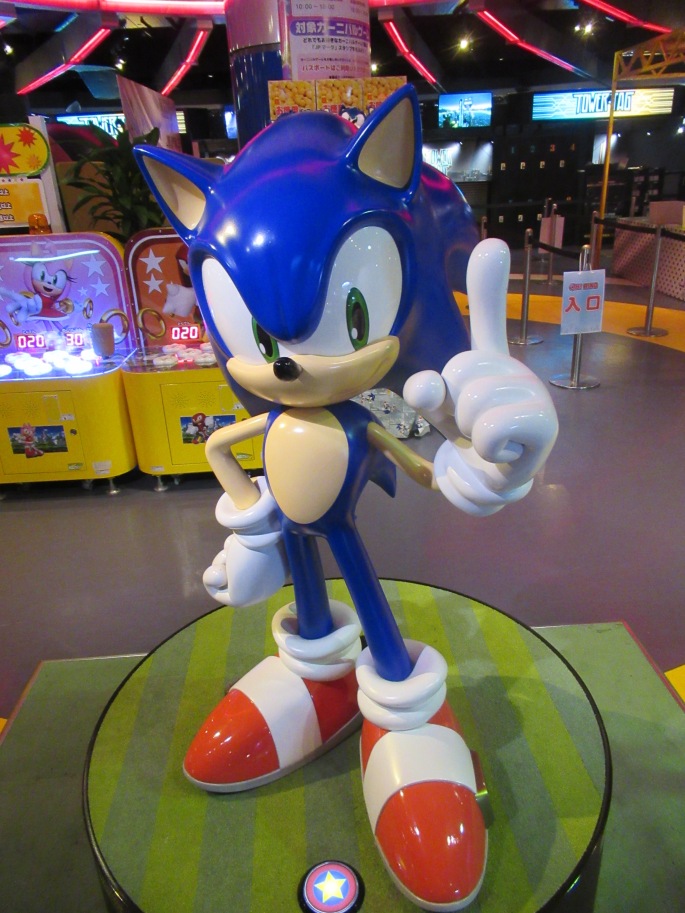 Like I said, this park is pretty much all Sega themed. Sonic the Hedgehog appears many times including his own restaurant serving Chili Dogs (Sonic’s favorite if you didn’t know). As much presence as he has in this park, Sonic lacks his own ride in the park. He’s mostly just figure head of the park with some arcade games with his franchise and a lot of merch. Sonic related items are literally the only thing they sell here. 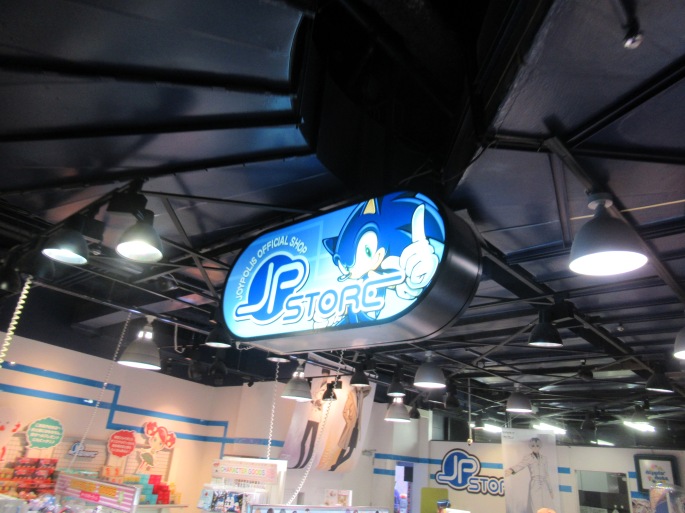 The park was home to not many rides. Most have some video game component to them. There was this one thing where you raced on a bobsled track (virtually) and it would give a prompt to turn your throttle a certain way and if done properly, you’ll get a huge boost and your ride vehicle will start flipping upside a bunch of times! It was awesome! 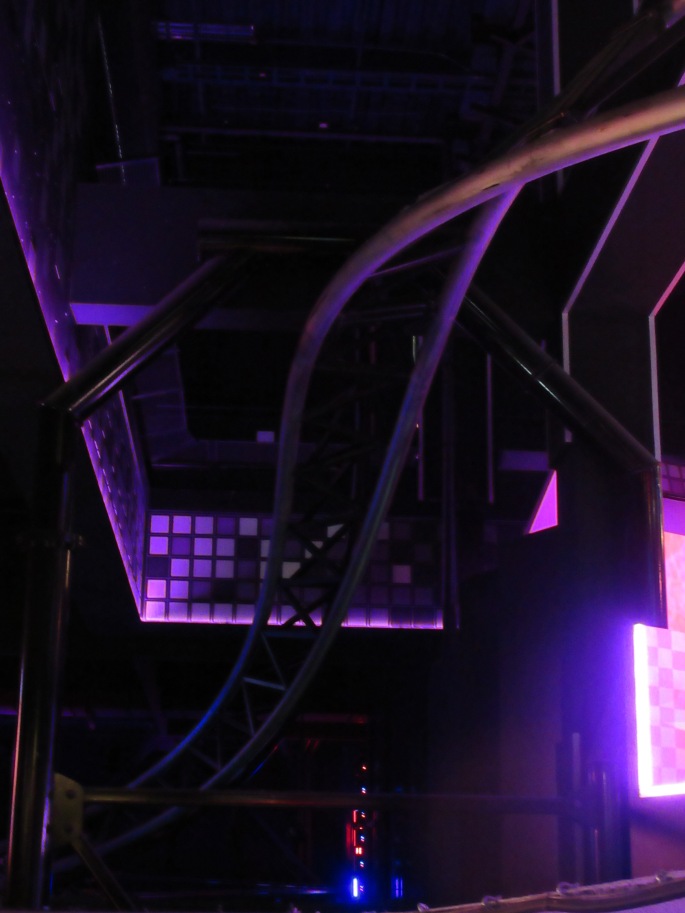 Not too much to see here for Coaster Enthusiasts, but if you love video games or Sega in general, this is a must do in Tokyo! 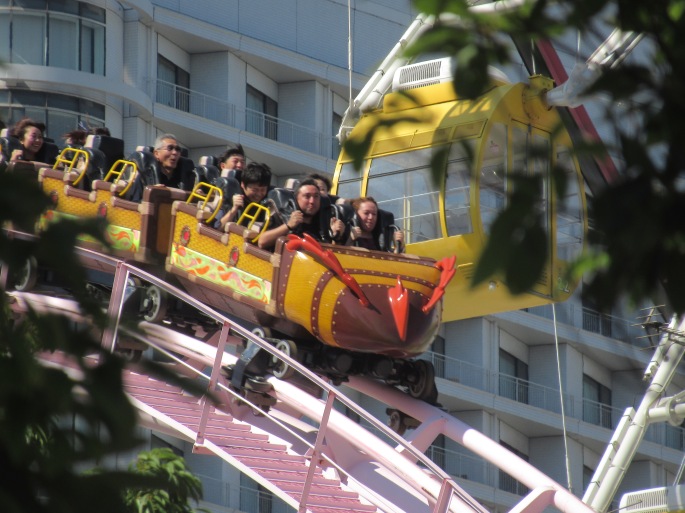 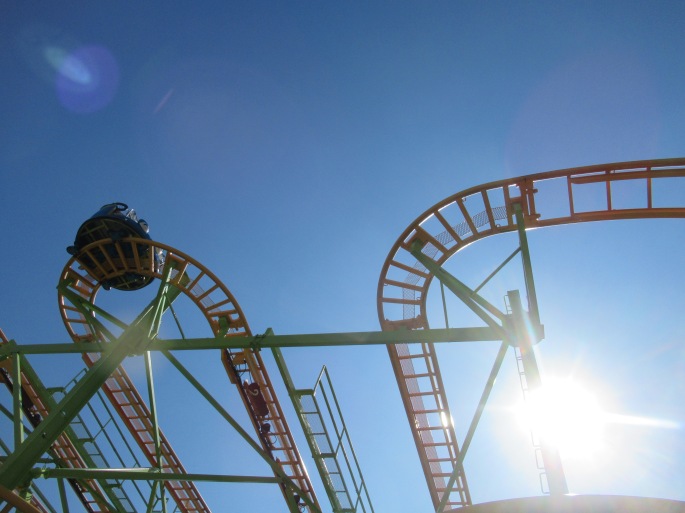 First off, the spinning mouse. I don’t remember the exact name, nor am I gonna RCDB it right now. I think it was called Crazy Mouse, but don’t quote me on it. It’s a typical Reverchon spinning mouse. Same as Exterminator at Kennywood or Raton Loco at La Feria. They’re fun, but nothing outstanding. We went here first to beat the crowd. Good choice, because when we got off the line was probably 20-30 mins. 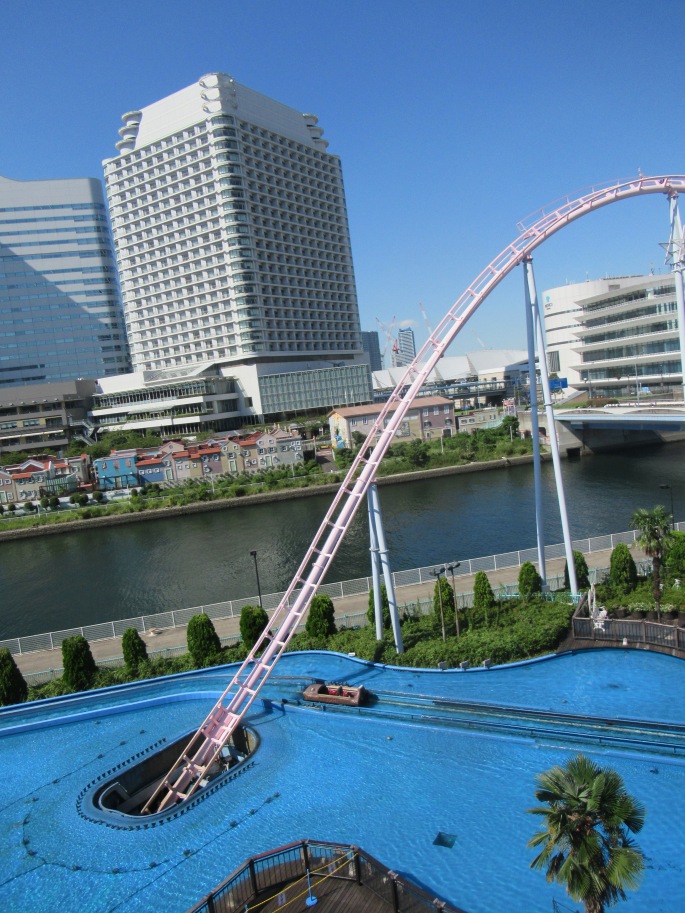 We knew Vanish would have a line still from all the ACErs, so went to the Log Flume first. 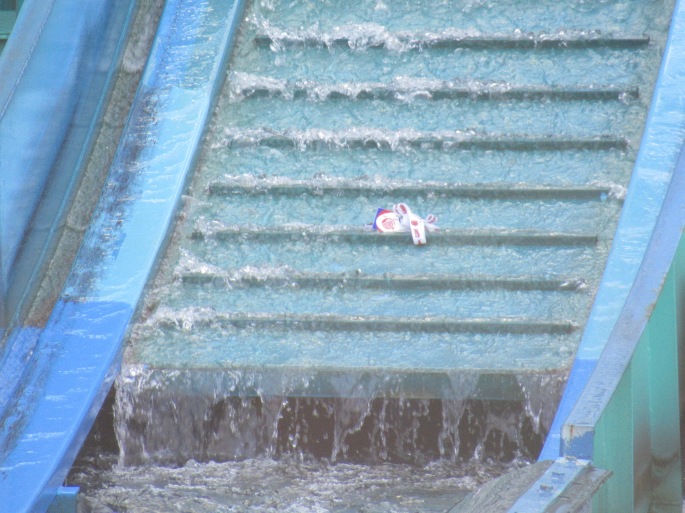 I always heard there was a crazy yeet flume in Japan, but I actually thought it was the Tokyo Dome City one, not this one. I missed that one over there so I don’t know what that flume was like. I didn’t tuck my lanyard in thinking it was a normal flume. Nope, this ain’t not normal flume! as soon as we hit the drop, random ejector airtime and my lanyard goes flying. RIP lanyard 2018-2018. 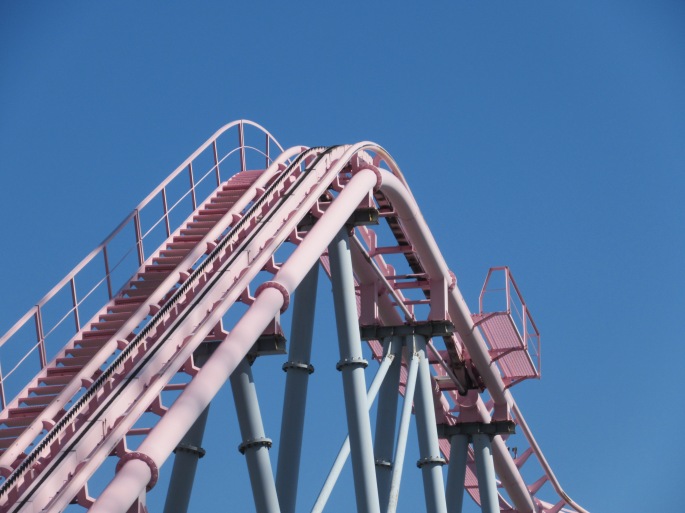 Vanish was ten min wait at this time, so we figured, that’s the shortest we’ll wait for a one train coaster with 170 ACErs in the park. Overall, it’s not an outstanding coaster by means. It’s more a long the lines the NYNY Coaster in Vegas, but glass smooth. Nothing amazing, but hey, it’s smooth as butter. The only reason it’s famous is for the drop that goes underwater. It’s a coaster I rather watch than ride. There’s not much room for tall people. 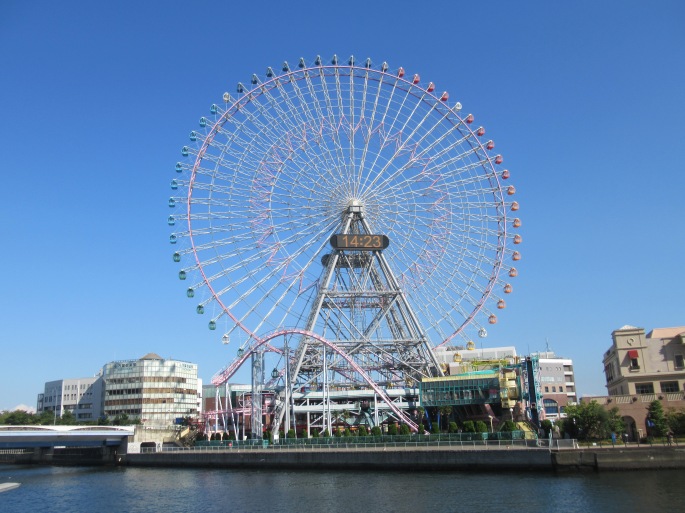 The park is sorta separated into two parks. You have to go outside the park to the main road and walk on the side across until you cross this river. The second half of the park is on this side. 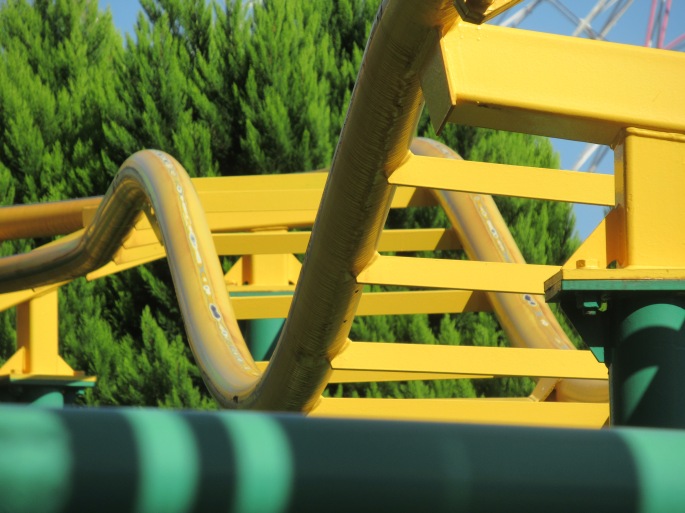 There’s one reason to come over here. Family Banana Coaster! This whole area of the park is more or less a kids area, with one major flat being a giant enterprise. 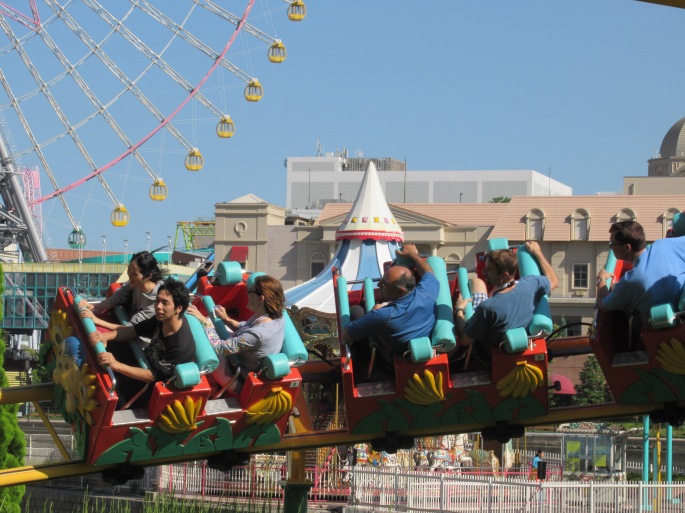 Senyo does not manufacture their rides with American Coaster Enthusiasts in mind. It’s gonna be a tight fit! Also this ride randomly has onboard audio. 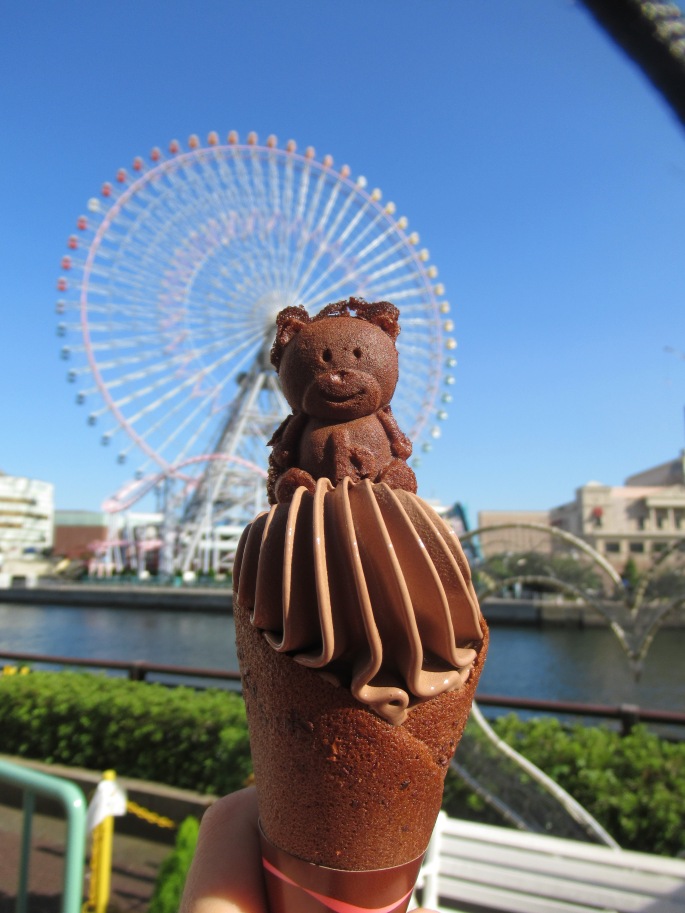 Before heading back over to the fun side of the park, I did notice an awesome ice cream stand selling these. Had to get one! 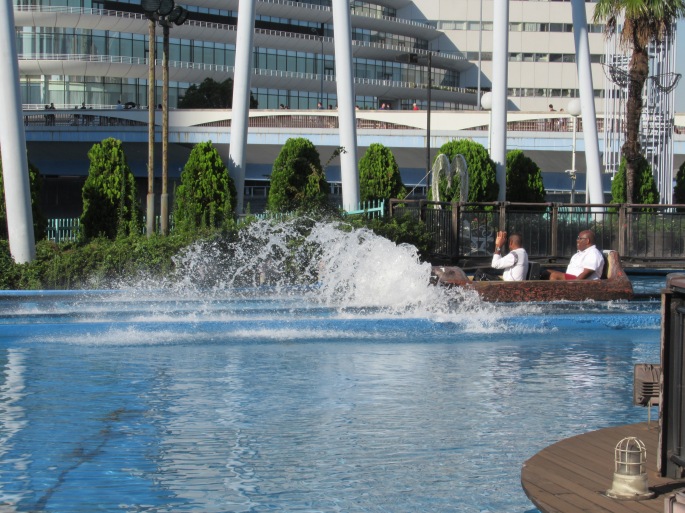 We only about $35 US dollars worth of credits on our pass and we basically used them all. We had enough for some shooter dark ride. After that, all the ACErs sat down and had some lunch by Vanish and watched it go by till we had to leave. 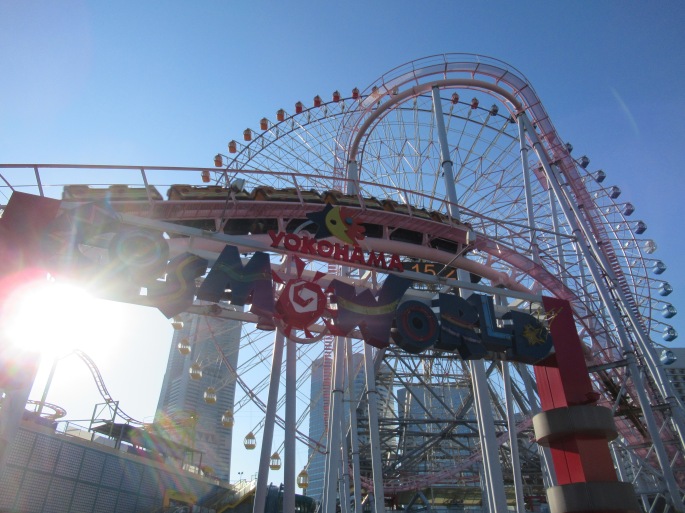 Cosmo World is a fun little park with one of the best flumes on the planet! 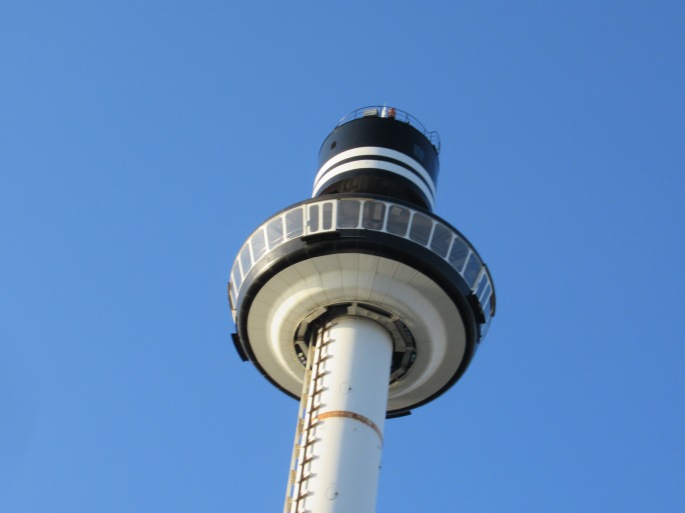 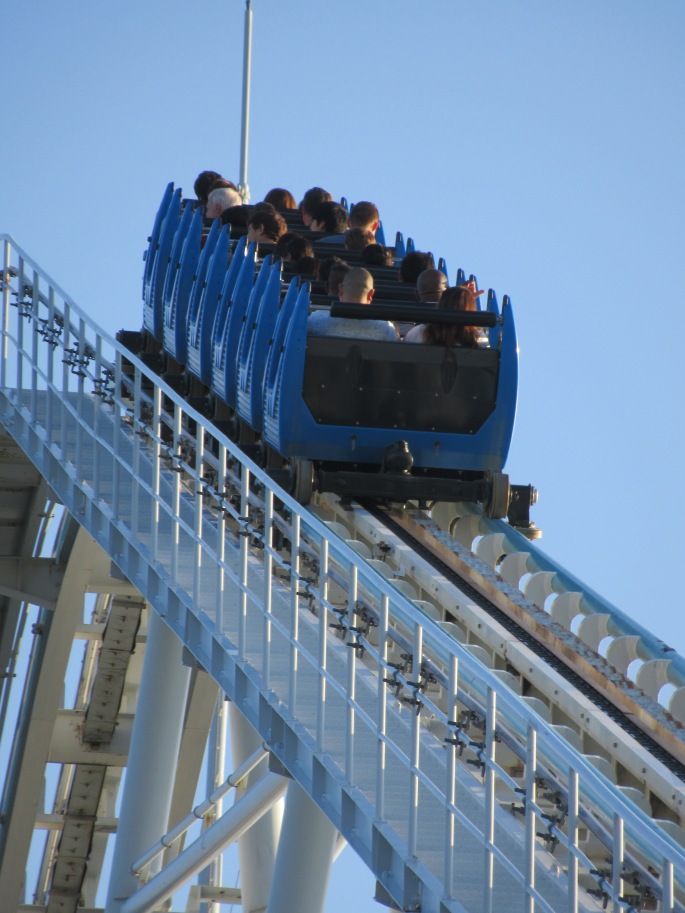 The only coaster at this park is Surf Coaster Leviathan, a Togo Hyper-lite. This coaster extends 200′ over the ocean and is packed full ejector airtime and forceful helices! 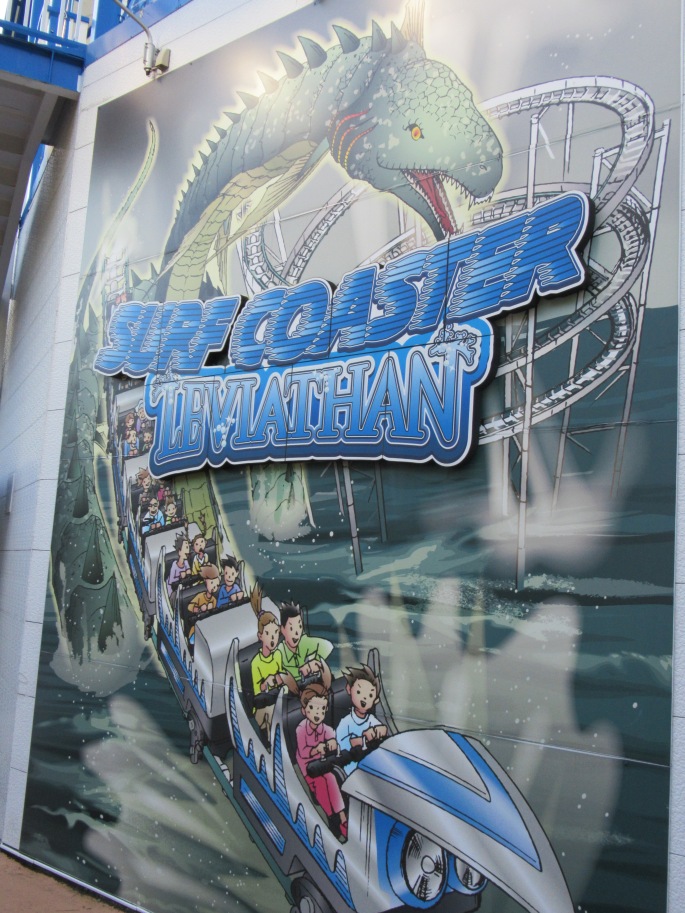 At this point of the East Meets ACE trip, this was my favorite coaster on it. 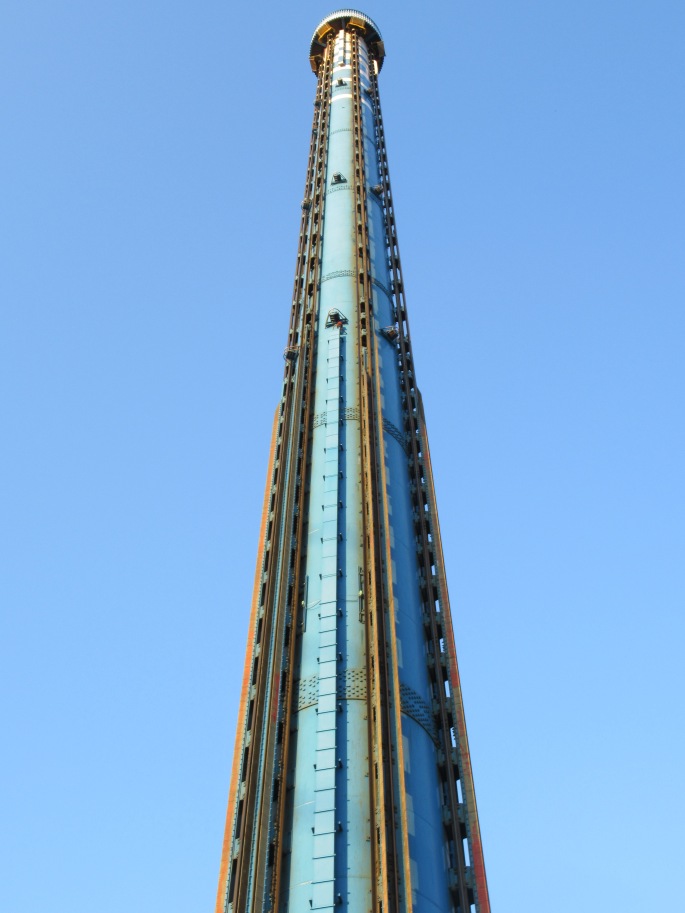 Blue Fall is the tallest freestanding drop tower in the world! But guess what! It’s closed! We saw it cycling when we got there, but the park official said that it was down for maintenance and their maintenance crew was test cycling it. Sad that we missed it, but nothing you can when it’s an Intamin. 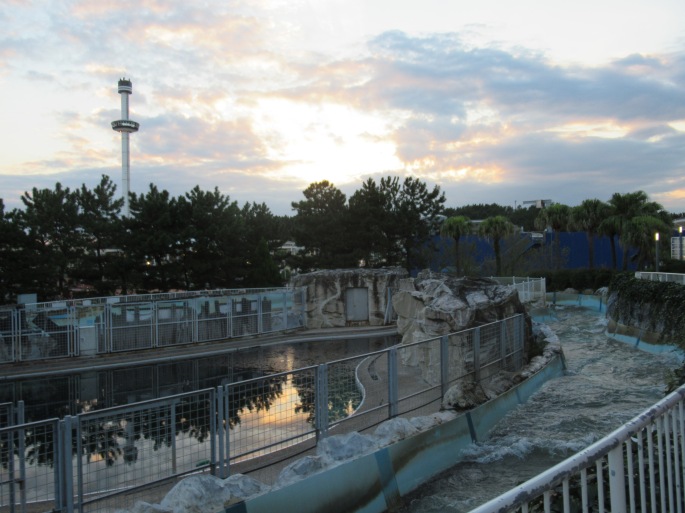 This park is basically the Seaworld San Diego of Japan. One major coaster (I haven’t been since Electric Eel), a sky tower, a rapids ride, a chute rides (this one not being a technical coaster), animals, and a few kiddie/family flats. We ended up riding Aqua Ride ll (rapids ride) three times without getting up! It was nothing special, but it was fun nonetheless. 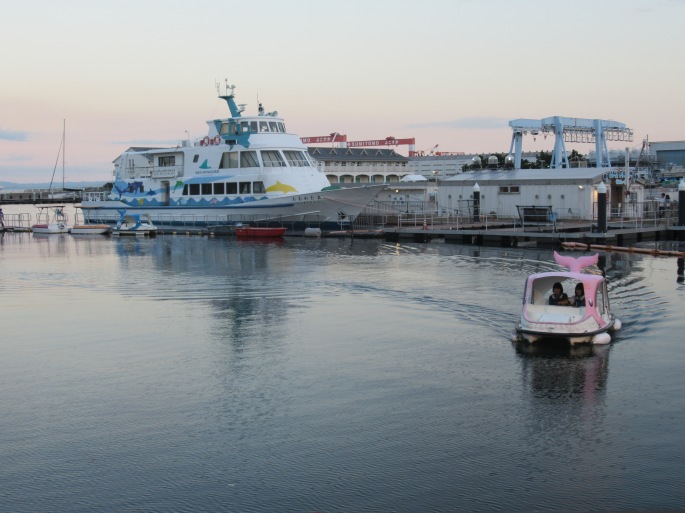 I’m pretty sure this park is actually not all amusement park and is a wharf too. People had their dogs with them, there were boats sitting out on the water. This place didn’t really have an amusement/theme park feel. All the rides are far separated so its like being at a city park on the water for most of our visit. 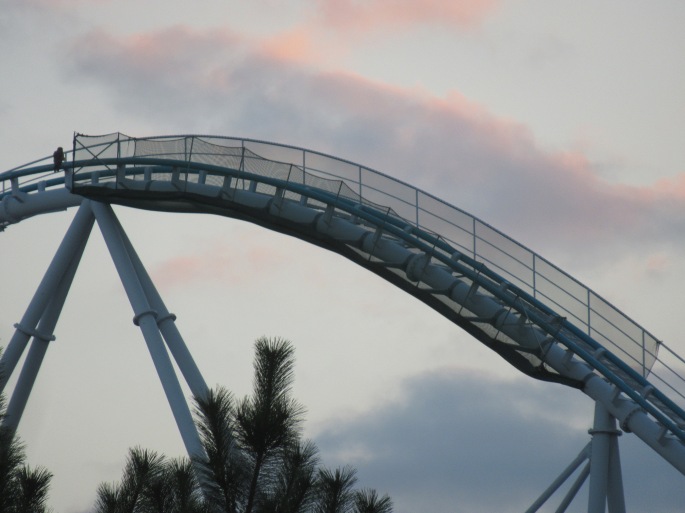 We had about 25 mins left. Time to finish out with a few more rides on Surf Coaster! 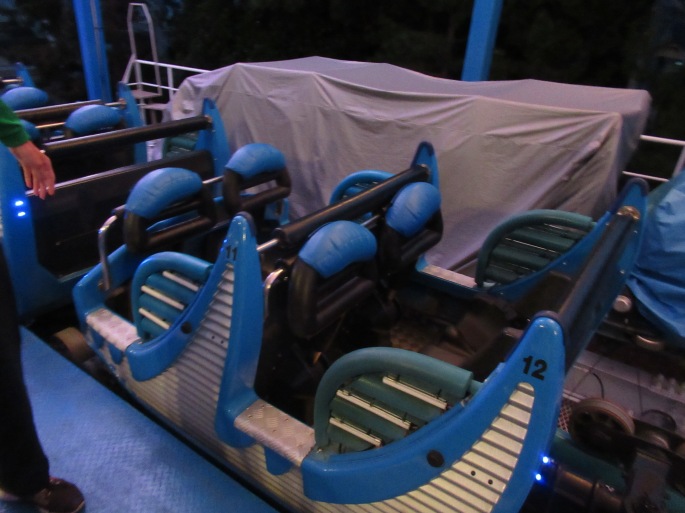 The restraints on this ride are really weird. They have these huge balky lapbars. They didn’t come down very far on us big people. And the sketchy thing is that the lapbar isn’t very wide so I riding the ride without any part of my body touching the restraint as I just spread my legs out to the side.